Review of State of the Union at Strawdog Theater Company 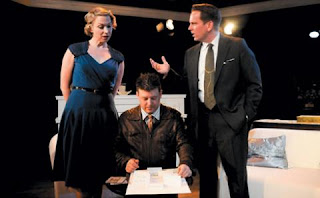 Once a week ago I went to a play called State of Union and it was good. It was a great show. I liked it a lot. The play was about somebody that was running for president. But he didn’t want to be president. It was about a union, and it was in the state.

Michael Dailey, he plays Grant. He was very funny at parts; sometimes he wasn’t. At the beginning he didn’t want to be president and he was telling everybody. That was a serious time. The guy that was married to the girl that was drinking with Grant’s wife gave him some stuff that he could do when he was president on a card and Grant said “Could you please throw these away.” It was funny.
Kristina Johnson played Kay, Grant’s girlfriend. That character was one of my favorite characters because I just thought she was smart and cool and fancy. I thought she had some good ideas about him being president. She published newspapers for work. Her costume was very very pretty, like the black and white dress she wore until it got stained; then it didn’t look as pretty--but it was still very pretty.

Kendra Thulin, she played Mary. She was Grant’s wife. She played a good part--she did a good job pretending to be angry. She did a good job because I think she was cast very good; she was a good choice as the character. She had to pretend to be drunk. She had to pretend that someone was her husband, and I thought she did a good job of that because it really wasn’t her husband. It was very cool how fast she talked.
Andy Lawfer played Spike who was Grant’s assistant, and it was funny how he tried to eat Grant’s hamburger. Then Grant’s wife said “don’t you dare” and he said “okay, I can starve.” It was HILARIOUS (all in capitals, please). So he had a pencil behind each ear, and he was looking for a pencil, and he found one, but not from his head. It was funny.

BF Helman he played the agent to the president. He was trying to find someone to be president because Franklin Roosevelt was dead. He kept talking on the telephone in the middle of a conversation about Grant. He just kept going on and off and on and off--it was funny. He was kind of a good guy and kind of a bad guy in the play. 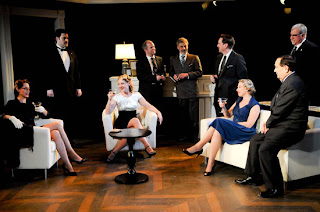 Kate Harris, she played Mrs. Alexander. She was so very funny because of the accent that she had. There was a funny scene that she was in. Her husband made her so many drinks that all those drinks made her get more drinks. Once he brought her 4 so he didn’t have to go back so much. Jim Heatherly played Judge Jefferson Davis Alexander who was the husband of that girl I was just talking about. He gave Grant the letter, and that’s the one that he threw away. Both of them did an awesome performance.

Annie Munch, she did a good job playing all the servants. She didn’t have a very big part, but I still think she did a good job. She played all the maids except for the boy ones. I could tell that they were different because one of them wore a hat and one of them didn’t. She was also the food maid that brought them food. And that’s when the wife said “Don’t you dare, Spike.” Pat Whalen played another of the servants. He brought in the radio. It was really funny how he said, “lots of people want radios today.”

Rob Skrocki, he played the Senator. He was at the party with the girlfriend and the woman the wife talked to. Brant Russell played Hardy. Hardy was so funny because he said, “Nobody told me not to dress.” He was the only one who was dressed up fancy. The friend Sam (John Zinn) came in at the party and it was scary when the wife found out that the girlfriend was in Detroit at the same time she was. Samantha Gleisten played Mrs. Draper. When she went looking for her wrap the wife said, “Would you like some help?” And she said, “No, I’m just going.” I think maybe she missed her husband or her children.

The set was cool because of the arches. The arches were so cool. The set had a couch and some teacups, and I actually got to pretend to drink from one of the teacups when they were practicing for the show. I think all the places they went were almost the same, but that was okay because it was just a set. They went places that you would go awhile ago--I mean like in the time that Eleanor Roosevelt was alive. The person that made the set (Marianna Csaszar) did a good job because they took away the desk because you would not have a desk everywhere you go.

The costumes were cool because they looked like that kind of time period when Amelia Earhart was alive. Joanna Melville was the costume designer and she made good costumes because when she made them she must have thought about the time period that this was in. My favorite girl’s costume was the black one that the girlfriend was wearing. I thought the costume designer did a good job at making it look like it was stained when the wife spilled a drink on her. And I loved the one that the wife wore when she first came in. I liked Spike’s and Grant’s costumes--my favorite one was the white one.

Geoff Button was the director and I think he did a good job casting everybody. I think Michael helped him. Michael is my friend who I helped do his work while my dad was rehearsing. The director did a good job directing because he made the story very clear for grownups and some of it for kids.

I felt good to see the show. I was glad that some people that I knew were in it, and some people that I didn’t know were in it, because I thought that then I could meet some new people and see some people I had known before. People that like romance and presidents would like this play. Tell kids that if they want to come see the play, “Well, you might not understand all of this.” That’s okay because not even some grownups understood all of it. And tell them there will be some kissing too.
Posted by Ada & Mom at 10:06 AM

Ada, you've beaten us at our own game.