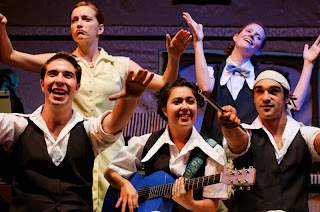 Once upon a time I went to a show, and it was called the Redmoon Winter Pageant.  And it was a good show.  It was about a band that were very old now and they used to be in a band and now they are not because they are so very old.  The people that played them were actually pretty young.  They wore wigs and they moved like old people.  The characters that are in the band are Winter, Spring, Fall, Summer, and Rita.  When we came in you could make like shakers to shake at the beginning.  That was pretty cool.
Winter was played by Carly Ciarrocchi and she was the main season or why was it called the Redmoon Winter Pageant?  She played the guitar and it was sometimes red and sometimes blue.  So she played two different kinds of guitar—one of them kind of looked like a bass guitar.  And she sang a song by herself, and it was shadow puppets behind her, and it was about going on tour.  The performance was good because she actually acted like she was a little scared when she sang her song.  And it was great because then it actually felt like she was actually singing a song that she wrote, but she actually didn’t write it, I know.  Misha (Mikhail Fiksel), who works at my dad’s theater, he did the composing.
Spring was played by Felicia Bertch.  There was this song called “Millions of Bubbles,” and she had like a tiny little kid costume on that was not exactly like a kid costume but it was tiny, small and had little tiny feet and arms.  And it only had like little tiny shorts.  They were golden.  Everybody had something that was golden on in the song.  And Winter and the girl that played Rita were both little girls in little tiny little costumes too.  The song was really funny.
Fall was a boy (Alex Knapp) and he sang a song called “Apples in Space.”  And I got to shout out something, and I said “corn.”  He was like the one who went in a walker and he paid for it—like he got out fake coins and put them in a box kind of thing and then he went inside to talk about the box. And it was funny because he was like bloop bloop bloop when he put the invisible coins in.  The song was fun because there was a piece of paper that went around and came back--like a story about in space. 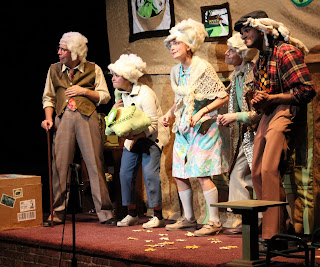 Summer was a boy (Eric Prather) too.  I have no idea why they had Summer to be a boy because Summer is actually a girl’s name.  He was the only person who actually wore glasses, and he had very white hair, and he had a cane.  His song was called “Surf Detective” and the detective wore glasses.  And he surfed and found stuff that were lost.  His performance was sometimes very funny.
Rita was played by Kasey Foster and she was the lead singer of the band.  And she wore a wig that was like toppled up and was white.  She was the seasons’ mom.  She didn’t want to start up the band because she felt like she was a little too old.  Her performance and her singing was good because she had to sing in that voice—in the voice that sounded like her character.  That was a pretty hard voice.  There was this scene where Rita was dancing and she said “turn that down” and it was funny because she was dancing to the music that she didn’t want to be on.  And that was really funny.
The scene where they were all looking at the box was funny.  So they drank…and they looked at the box…and they drank again.  It was one of my favorite funny things.  That scene had all the seasons in it and even Rita, and they were actually in Rita’s house.  It was supposed to be like a tv show because of the laugh track, and there are usually not laugh tracks in plays.  They were trying to tell you what kind of comedy they were doing, which is kind of a kids’ comedy.  I didn’t like the laugh track that much in the play because I don’t like it in comedy shows and I don’t like it in tv shows either.
Sometimes when I am watching plays I kind of think I am at home, and then when I look up at the play then I actually realize that I am not at home.  And it happened twice at this show.  It says that the show was a little bit calming at some parts.  But some parts were not actually that calming—like they were very like rock and roll and funny.  And then they weren’t actually that calming but sometimes they were.
This show is for ages 1 and up because I saw like a one-year-old there and she laughed during the show—like hahahahaha.  People that like funny stuff and bands would like this show.  See you at my next review.  Bye.
Photos:  G. Thomas Ward Photography
Posted by Ada & Mom at 12:59 PM