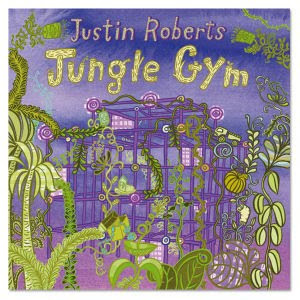 Ada! I just discovered your blog this morning and read several reviews and really loved your take on things.

I was a big Justin Roberts fan, from almost the beginning of his career (he was just putting his third CD when I met him at a craft fair, and I bought them all). When my kids were little, we listened to him almost every day. Now they are 9 and 6, and my older son started liking all sorts of other music, and I realized we hardly listen to Justin Roberts or Dan Zanes or Elizabeth Mitchell or any of the other wonderful kids' music CDs. I think we might have even missed the last Justin Roberts' CD. I have all of them from the earlier years, but the last one I bought was Pop Fly. And we didn't really listen to it very much. It didn't seem as good as his other CDs.

I still think of his song "Dad Caught Stars" when I see fireflies in the summer. And every time the kids lose a tooth, we think about the song "I Lost the Tooth I Lost." Once we did lose one of Max's teeth after it fell out, but we we found it again.

We have seen Justin Roberts in concert 5 or 6 times, and both my kids used to really love him. We also like how he does all the hand motions for his songs, but my kids were too shy to get up front and dance and sing with all the other kids. We all sang quietly from our seats, though. I like that you were up there, singing along.

Because of your review, I will go and buy his new CD, because you reminded me how much fun he is. Thank you for writing it, Ada.

By the way, we are also homeschoolers, and actually, this is on the reasons I think we stopped listening so much to Justin Roberts. Even though we love his songs, we also really really wanted to hear one about homeschooling. Or even better, about unschooling. But that is really probably an unlikely thing. Maybe you should help him understand some of the things that homeschoolers do, so he can figure out what he could put in a song.

I think you should also write him a song about your grandfather and his obsession with pickles. Maybe he will record it and give you credit on his next CD. Or maybe he will ask you to come and sing it with him. Wouldn't that be fun?