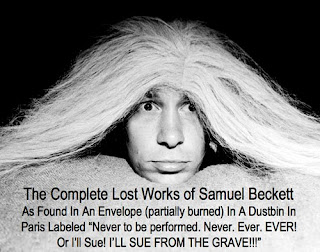 Thank you so much Ada for your very thorough review of "The Complete Lost Works of Samuel Beckett...". I am glad you enjoyed it so much because we have been working on it for a long time. (I had a feeling you did because I could hear you laughing from the stage.) I hope some day you will get to see some other plays by Samuel Beckett. I would be very interested to hear what you think.
your fan,
Greg