Review of Cherry Orchard by Anton Chekhov at Strawdog Theatre 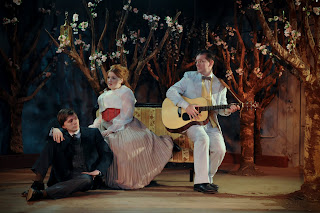 There was this show that I went to and it was good. It was called the Cherry Orchard. Maybe I should start at the beginning. There were some funny parts. Yepihodav was my very favorite. Well he wasn't my favorite actor. Shannon was my favorite actor because there was lots and lots of kissing. There was some very funny parts. And when Yepihodov was coming some people said "Here comes trouble."

Jenny was awesome. It was just very good and better. She seemed different than she was offstage. Tom was pretty funny. He was just giving a speech about something that he had—a wardrobe or a bookshelf, I don't know. 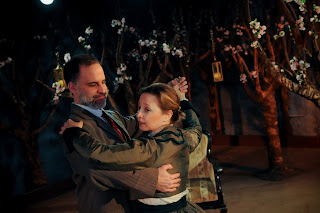 There was one sad part: they had to move. At the end don't you remember what Lopakin said? That he bought the whole entire house. And then he was laughing because he said that and they cut down the cherry orchard. Dad was my favorite actor because he was always great but he did kiss another woman but they were falling in love. But he was really in love with my mom. Because he really was. I thought that there was funny stuff that he did. 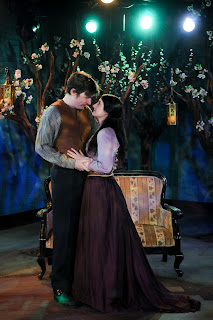 The music was awesome. It was very groovy. The dancing was great because it was very good and groovy and just great. I thought that Michaela was very funny. I thought that dropping the keys was hilarious. Pischick was going like he fell asleep and then someone said like "WELL" and he was like "Huh? Huh?" I thought that was good because it was hilarious. The directing was good. It was just funny. Other people thought the crying when the cherry orchard was cut down was funny but I didn't. But I didn't want anyone there to laugh because they thought they were doing the play wrong because they weren't.

Cherry Orchard is for everybody.