Review of the Parts of Strawdog Theatre's St. Crispin's Day that Ada's Parents Would Let Her See 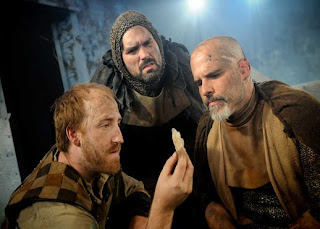 Once upon a time I went to a show and it was called St. Crispin's Day. I didn't really see the whole show because it was a little bit scary.

And they chased Kyle but not for real and they threw rocks and mud. The rock one was even scarier than the mud. Make sure with your kids that they already know they are just pretending.

They wanted to kidnap my dad but not really. It was a really stupid plan—well it wasn't stupid but it wouldn't work.

Part of their costumes were supposed to be chain mail. It was really just yarn. I liked how it felt. The costumes were very cool. But I didn't get to see all of them. One of them looked like a guy from a church. And he was the guy who played Yepihodov.

There was a scene where the girls throwed flowers and carried a flag when the king was coming through which was my dad. He didn't have a very big part. It was daytime and they switched to day and nighttime. I don't know how they did that but I think they just did something like up and down and then it will go night and day.

The music that they played when it was about to start it sounded like—I can't really describe it to you guys. A little bit of horn but a little bit softer and drums. Boom ba boom boom boom. A-unh.

In one scene, dad was in disguise as just a Englishman. But they didn't realize it was the king and they got taken away to jail. Kyle, he mostly talked to Dad and listened very carefully. And that was all that scene was almost about—listening. The villains were saying that Kyle wasn't good (but just for pretend). They were selfish (but just for pretend).