Review of League of Awesome at Factory Theater 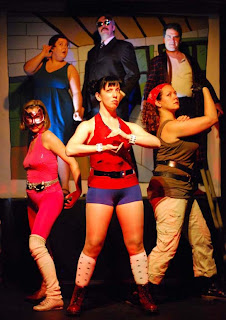 Once upon a time I went to a show and it was called The League of Awesome and it was awesome. If you don’t know what a league is, you can learn it from me, ADA GREY! A league is a whole bunch of people put together. The show was about a league of superheroes. They had names for superheroes I had never heard of that sounded cool: Cat Scratch, The Beacon, Rumble. There was one person with just a regular name—Sylvia. No superheroes in comics do that. I think they tried to be funny by giving her not a superhero name. It was very funny.

It seemed like it was going to be horrifying and very funny both at the same time because at the start it had The Sorrowmaker almost winning and Sylvia took the commissioner’s tie and made a mask and in another scene the commissioner said “where’s my tie, I can’t find my tie!” The League of Awesome are upset that they cannot fight any more villains because there are no more villains to fight after they fight The Sorrowmaker. They were fighting with each other because they couldn’t get out of the house. Then they realize he broke loose again.

The set was cool. It seemed like a comic book. It had all these comic book designs, like it had panels. They used comic book colors: red, blue, black, white, yellow, and gold. The costumes were very cool. I liked the mask that Cat Scratch wore a lot. Not kidding. Sylvia’s costume was orange and had ruffles. I think the director made the dress like that to be funny.

Cat Scratch was one of my favorite characters because I like cats a lot. I liked her power—that she could scratch. I liked how she really seemed like she wanted to go back to superheroing. Zoe was the leader of the League of Awesome. She was very smart, I thought. Rumble’s super power was that she had really far punches. Carrie Okay comes in at like the middle. Then they invite her to be in the League of Awesome because she is Sylvia’s sister and she can make people sing. Sylvia was funny. She can make things come true. Like she makes Ms. Great.

Ms. Great is created by Sylvia. She was dressed in gold. It was sparkly and shiny. The Sorrowmaker gets attached to her instead of the girlfriend. He tricks her into working with him. She is actually a good guy but he is a bad guy. She acted kind of like an alien because aliens say things like “Invader, invader, invader!” and she said “You’re welcome!”

The Sorrowmaker was the bad guy. He was kind of funny. I think the character is kind of like a villain who doesn’t know what he is doing. The villain is not really all that smart. The Beacon used to be his girlfriend but then he broke up with her without even telling her. Then they showed a scene of what didn’t happen—her not paying attention that well. I don’t think that’s a reason to break up with someone. Then it showed a picture of him starting to like his other girlfriend. The second scene I thought was the true one.

I liked the girlfriend character a lot. She seemed smart. She was kind of funny. She seems like she really knows something about everything. She has to teach the Sorrowmaker how to be smarter.

It was funny because the Sorrowmaker and Zoe a.k.a. The Beacon were about to fight but they decided to dance. I laughed.

The Narrator was pretty hilarious. You expect not one who seems drunk. You expect a narrator that is not like this narrator. He always wore this real funny coat like a robe that he wore outside.

I think 6 to 100 year olds could go. There is going to be bad language. The six year olds I think could be ready for that. If littler children want to go, just tell them there will be some bad language, and ask them if that is all right with them. It was the League of Awesomest. See you at my next review. Bye. The end.