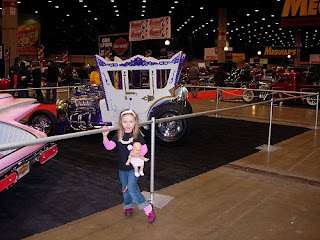 We went to the car show with Aunt Amanda and Grammy and Grandpa. I could be a judge in it! It was really fun. We wanted to see my uncle's car in particular. You could find anything there. And there were lots of funny things and scary things. Like one with a sword and a bow and arrow and a skull. That was pretty scary!

There was one that reminded me of Mike from Monsters. Inc. I love how he shook her in his arms and told him to put her back where she came from. And in the takeout scenes he says throw up instead of grow up.
There was one that was greater than any one else. It was a purple carriage and I had a little class about it. I had my uncle and my aunt and my mom and my dad and my grammy and grandpa were in the class. Well, they were pretending to be kids. And it was so much fun. 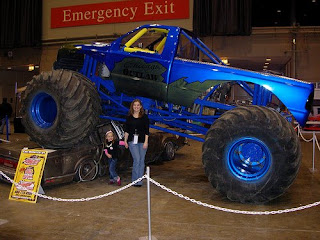 Well that's not all, everybody. Well there is some more of my story but if you don't see the rest that is ok. If you never see it ever that means that you will never be able to see it ever again. If you live in Canada you could still see it, but never mind, let's get back to the story.

Uncle Brad won the first in the class. He might win every day. And Aunt Amanda needs to go to work everyday, well not everyday. She doesn't need to go there when I am supposed to come over to visit.

And there was a car you could go into the car. We were looking for one of those. There was a really big truck. We got to take a picture under it with Uncle Brad and Aunt Amanda, of course. Something that was very fun was there was pogo sticks. And there was a kid up on stage. Well, never mind, lets get back to the cars. So, you could go in a car. So you could go in some of them but not all of them. There was paint right on the car it was not actually ice cream but it was paint and it looked like ice cream had melted on the car. Other people should go to this car show because they have cars.

(Thanks to Aunt Amanda and Uncle Brad for the pictures!)
Posted by Ada & Mom at 3:43 PM No comments:

At the Art Institute we saw a sign hung up on a stand and it said Kabuki. So, we got tickets for it. And then we thought it was a good idea to go because we called my Dad.

They wore dresses and these little socks on their feet.

I liked that funny thing where the husband thought it was the servant instead of his wife. Because that was just funny. She was hiding. And there was something funny when the servant was under the blanket and he was sitting in the chair and his legs wiggled because he was so frightened when the wife patted his leg.

Then there was a princess one with a fox. And a husband but you didn't see the husband. And there was an older girl and a smaller boy. And one was playing the fox. He was nice and there were these policemen who were scared of the fox but he was a nice fox. And the princess liked him. I liked the part where he hopped? He put his hands in fists to hop.

I would like to see a Beauty and the Beast and Snow White Kabuki on my honeymoon.
Posted by Ada & Mom at 1:58 PM No comments:

Review of Fetch! with Ruff Ruffman on PBS Kids Go

Fetch! was pretty good. There were great contestants. They did a great job because they did a great job at making a toy. There were some boys staying behind and some girls going. And a few boys did some great projects. There was making a Fetch toy who did a good thing. Well it didn't actually do anything but the other one (that Ruff Ruffman had)did some things. It did anything that he said--like ice cream headache. There was really great contestants. They were so great. The toy-making ones. There was great stuff that they used to make the Fetch doll. There was gooey and bouncy things to make a toy. I think the polymer was the girl who made it. You need to just put them in something that looked like Ruff Ruffman and then it would be all ready once they got to the Fetch! House. Other kids should watch Fetch! on PBS Kids Go because it has a dog. If some people are allergic to dogs they may not watch it. If people are allergic to cats they may not watch it because it has one cat in it.
Posted by Ada & Mom at 4:48 PM 1 comment: