Review of Mary Poppins at the Cadillac Palace Theatre. June 10, 2009 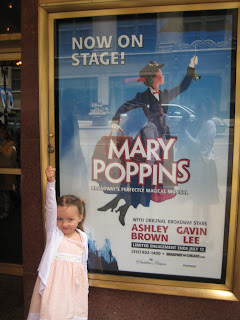 I went to a show and it was called Mary Poppins. I was thinking it was going to be just like the movie, but it wasn't. And it was a very strange version of Mary Poppins because she came back after the intermission. A new nanny came and that new nanny was very rude—just the kind that the father wanted. "Let's Go Fly a Kite" was in the middle. And none of the nannies that came to the house to be the children's nanny flew away in the wind. There was instead of penguins there were statues in "It's a jolly holiday with Mary, no wonder that its Mary that we love. When Mary holds your hand you feel so grand, your heart starts beatin' like a big brass band—baaaa!" Supercalifragilisticexpialidocious also came at a different place. It was danced differently. They made letters with their bodies.

My favorite part was when Bert made a kite for Jane and Michael. Bert was a funny character. And also very kind. And also very fun. "Chim Chim-in-ey Chim Chim Cher-oo" was a very fun thing to listen to. (That rhymes!) Bert walked on top of the wall in "Step in Time." How did he do it? He tap danced too. He was upside down on the wall which was very cool but I don't know how he did it.

Mary Poppins is a very kind nanny—kinder than the father wanted. The actress that played her must be very nice. Her singing was very pretty. She was pretty and very funny and also spunky and nice.

Jane and Michael were mean at first, then they turned nice. They loved their mother but they didn't love their father then because he was choosing a nanny they didn't like. They flew a kite with Bert and the Police Officer and they danced with a statue. They learned how to be nice and so did the father. I think the actors did a really good job—all of the actors. All of the actors did a really, really, really good job.

I thought the singing and dancing were awesome. "Practically Perfect" and "Brimstone and Treacle" were very good songs. And also the toy one—"Temper, Temper."

Everybody should come see Mary Poppins. And that is all I want to say. Good bye!
Posted by Ada & Mom at 2:23 PM No comments: 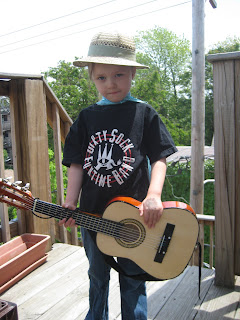