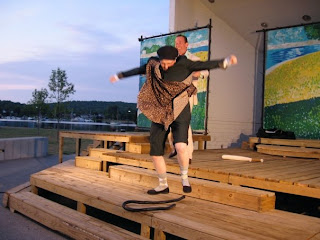 Once I went to a play and it was called Love's Labour's Lost by Shakespeare. There was a princess in it which was the greatest part of all. She was clever. Everything was great. Moth was funny—really really funny. He was the funniest page in the whole play. He was clever. A woman played a boy which was kind of great—because I have only seen a woman play a boy in Kabuki before. I thought that everybody did a good job. Moth copied Don Armado; it was hilarious.

Don Armado was funny because of the way that he bowed to the woman—Jaquenetta—in a funny way. He was kind of Irish in the play—because he talked Irish. He seemed dramatic and happy. He was loud and quiet—sometimes he talked more melodramatic. Sometimes he didn't talk so melodramatic. How he talked was funny for the whole audience. 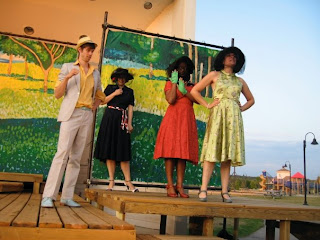 Maria and Rosaline they were kind of like the princess. I liked how they pretended they were the other person's woman. I really liked that because it was funny—not in a mean funny way. In a nice funny way. The guy who was kind of their servant said stuff that other people had already said, and that was funny.

I liked the costumes—all of them were pretty. The ladies' dresses: one was red, one was green, and one was black. Maybe they chose those colors because they were the costume designer's favorite colors. Don Armado's costume was funny. It seemed like it took place two minutes ago, not in Shakespeare's time. The director did a good job.

Everybody should come see this play. It is great because of the characters. Good-bye! See you some other time!
Posted by Ada & Mom at 12:07 PM 3 comments: