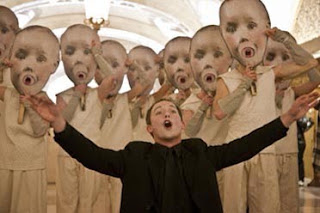 I love plays. It is my favorite thing to do and also playing and movies. See you some other time. Bu-bye.
Posted by Ada & Mom at 9:40 AM

What a great review! Reading it made me relive the evening, and that is a good thing because I enjoyed the show very much. I'm so glad we saw you and your mom at the show. Let's see another Red Moon spectacle sometime, ok? Oh, and see you at Cadence's tea party!

Thank you for reviewing Redmoon's Spectacle.
I'd like to invite you to our current show "Winter Pageant" that closes January 2nd.
Please have your mom contact me for two free tickets to see our show and write a review for your blog.