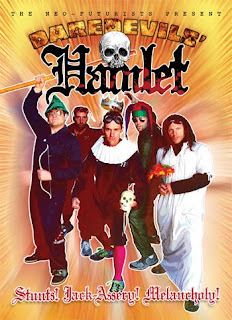 Thanks Ada - I'm glad your parents let you stay up past your bedtime for plays like this and for Strawdog events.

Sorry there were no foxes or dinosaurs in Daredevil Hamlet but if you asked Ryan after the play, I'll bet he could add them in for another time.

Keep counting on your fingers - it really helps with rhyming.

Thanks so much for your awesome review of Daredevils' Hamlet Ada Grey. I really think you get to the heart of what makes the plays you see so great. Thanks also for mentioning "The Complete Lost Works of Samuel Beckett". I am really proud of that show. I hope you will come review my next show. It's called "K." and is being done by The Hypocrites. Before you were born your daddy was in it. There is one point where a man takes his clothes off but if your mommy covers your eyes I'd love to hear what you think of the show.
your fan,
Greg

Thanks for your consideration.