Review of Comedy of Errors at Court Theatre 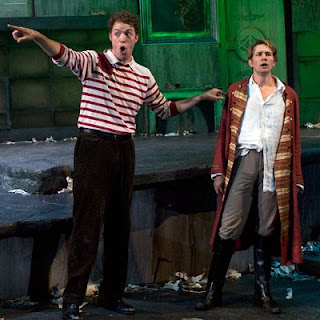 Once upon a time I went to a show called Comedy of Errors. It was very very very very funny. The play is awesome. Shakespeare wrote the play. It didn’t sound exactly like the Shakespeare play, but it did have stuff that was in the Shakespeare play. Those other funny parts that were not from the Shakespeare play were from the director’s head. Sean Graney’s head, which was the director. Shakespeare’s head also had some ideas, and they shared those ideas together even though Shakespeare is dead now.
The set was filled with paintings that were all doors so they could peek through them at the end. I thought it looked kind of dirty; it had like trash everywhere. It was funny because it had Coke cans and McDonald’s boxes and leftover Subway sandwiches. Those weren’t there in that time, in the time that Shakespeare wrote this play. That was an exaggeration. The set was very very cool.
The costumes were really cool because they didn’t look exactly like the time, but they kind of did. The
back of the dresses of Adriana and Luciana were kind of like Shakespeare’s time, like you could see some of their backs. They looked kind of like fancy dresses--from Shakespeare’s time and from our time. Some of the actors put their clothes on very quickly so they could run out on stage as a different character. The quick changes were cool. The people that were at the end that came and had a bow and were all dressed in black--they were the changers. I think they did an awesome job. They did it so quickly! I just thought of an idea that I could make a machine. My idea was that they could have a machine that put their clothes on for them. So then they could change their clothes even quicker. They could just like run out on stage with different clothes on, and it would keep putting on their clothes as they run.

I’ve seen Alex Goodrich in plays before. I’ve seen him in Emperor’s New Clothes, Midsummer Night’s Dream and Barrel of Monkeys. All the plays I’ve seen him in were awesome. This was an awesome play that he was in. I know that it won’t be the last play I will see him in. Comedy of Errors was the soonest play that I saw him in. The Dromio that is visiting is the brother to the Dromio that lives here. He did a clothes changing where he was the person that was kind of like a priate--he was wearing a pirate kind of shirt--and then he ran on stage in the tuxedo. He was the Dromio that visited first and in two seconds he was a different Dromio. He was awesome. He was so funny. Where he went to Rope Depot--that was a funny part. He is very good at acting. One of my favorite scenes was the one where his master talked into the microphone. The guy that he was recording (his master) just talked right into a recording thing, and then Dromio shut it off. Then at some point he showed it to the ladies, and they were so very angry about it, and it was so very funny. When the other guy said don’t lose the money, Dromio gave it to a poor person or a peddler. He tried to give it to the audience, and he called the audience peddlers because he was pointing to us. He wore this white abbey dress with a paper abbey hat when he was Emelia. Emelia was the father’s wife. It was so very very funny. I didn’t think he was really a girl but he did very good at it. 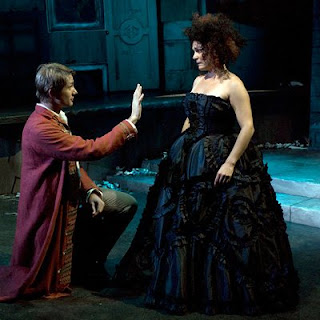 Elizabeth Ledo, she played three parts. She played a newspaper boy and the sister AND Dromio’s wife. She maked them all seem different which is a good thing to say about a person. She had all these funny lines as all the characters. The one where she drank the Coke can when her sister asked for one--that was funny. Antipholus, he falls in love with the sister Luciana. It was awesomely awesome because it was kind of funny how she like backed away ev
ery time he came close to her. She backed, backed, backed up, and then she finally ran into the house. Dromio’s wife was so funny. She had like Groucho glasses only without the mustache. She talked kind of funny. I’ve never heard anyone who sounded lik
e her before. It was very weird.

Erik Hellman, he played both Antipholuses, and he also played the father of all the kids. The Antipholuses were different because of their voices, but their hair and body were still the same. One went around with teenagers, the other didn’t. They had different outfits but still looked a lot alike. He sounded like Chico from the Marx Brothers with the bad Italian accent when he was the one that lived there. The one that went around with teenagers went to jail. It was so funny. He did all those funny stuff like talked into the recorder. How he made Dromio do all the work was kind of funny and kind of mean. He was just talking to the wrong Dromio like the whole time. He slapped him instead of his real servant! He is serious and funny both at the same time. He is funny because he was being serious. It was seriously funny. 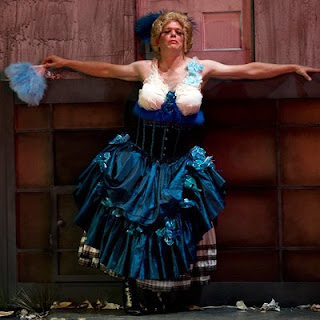 Kurt Ehrmann, he played Angelo and Dr. Pinch and the Courtezan. The Courtezan was so funny because he tortured them with his shiny underwear. He tortured them with his tights and his wig. Dr. Pinch was the doctor and he was also tooken to jail. He was like a wizard doctor and he had a deep voice and he didn’t make any sense at all. Angelo was so very funny. He tried to get the gold necklace and he stabbed his best friend by accident.

Stacy Stoltz, she played Adriana. She was so funny because she asked for a Coke and her sister drunk it because she was not being clear. She was just like, “You are not going to drink that are you?” She was mad because her husband wouldn’t come home to eat. She treated her husband badly because he wouldn’t come home to dinner and she asked him ten thousand times to do it. She was very good at acting, but I haven’t seen her in anything, but she was very good. The character with the animal was so funny and she was a bad guy--an angry merchantess. She needed the chain but she never got it.

Steve Wilson, he played a guy that got stabbed and a duke. He had to wear a fake mustache to play a duke. It was so funny how he got stabbed. At the end of the show it was ten hours ago since he got stabbed, and he was still alive, and he still had the sword in his belly. He says “that’s okay,” but then he started sobbing. It looked like he stayed alive, but he had the sword in his belly for his whole life. He did a good job doing acting.

People who like silly things but dramatic things would like this play. They treated everybody badly, but it was funny. I think this play should be ages six and up because I was six when I saw it. You should really go to this play because you would like it even if you don’t like Shakespeare because it is not all the way Shakespeare. After you see this, I think you might like Shakespeare more.
Posted by Ada & Mom at 11:37 AM

I saw the play, too, and I thought you did an awesome job of telling us what it was about. I like the way you described each character separately. It made it easy to understand who was who (even though the whole point of the play was to mix everything up so that it was hard to tell who was who).

I hope you write more reviews. I had fun reading it and I would look forward to reading reviews about other plays you might see at Court Theatre (or other theaters). I think it's great that your mother took you to the play. Keep up the good work!

P.S. I've seen Barrel of Monkeys, too, and I think it's very, very funny. Sometimes I laugh so hard I cry.

This is Alex, from the play! I am so glad you enjoyed our show! It is a silly silly play and I know that the rest of the cast and I loved hearing your laughter! I'll pass on your idea for the clothes changing machine to the costume crew! I'm sure they'd appreciate the help!!!

I look forward to reading more of your reviews! And maybe seeing you at Barrel of Monkeys sometime!