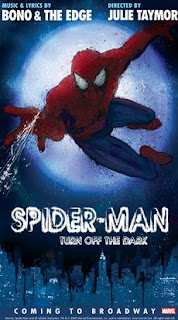 Very cool review. I want to see it now. Thanks!

I am a theatre critic in Chicago, and I just wanted to leave a short note to let you know that it is really great that you are out there reviewing shows. You are a role model for kids everywhere that you don't have to be a grown up to appreciate live theatre! (As a grown up myself, I wish I had known that when I was your age!)

Please continue to get out there and enjoy live theatre as much as you can. And make sure to thank your mom for all her help!

I loved your review. I live in Ireland, and it would be a REALLY long plane ride to get to New York! It is too far for me to go myself so was nice to read about your experience of the musical, it sounds very exciting. I hope you get to go to many more musicals so I can read about them :-)

H! My name is Amanda, and I am the online editor of Bunchland.com, a website about the cool and fun things families do together. We do video movie reviews, and we'd love to have you shoot one for us! You can get in touch by emailing info@bunchfamily.ca. Hope to hear from you soon!

Great job, Ada! I can't wait to read more of your reviews, and hope you are having fun doing this! Keep it up!

far more astute and comprehensive than the reviews in the times. they should consider hiring you ada.

Thank you for writing this wonderful review! It made me very happy to read it. I have written about Spider-Man as well but not nearly as entertainingly as you have.

I think you are great and I hope you keep writing. Please thank your Mom for helping you write this stuff and taking you to nice shows. I hope you get a toy dinosaur or fox for Christmas.

It sounds like Spiderman was even better than a play of a fox and a dinosaur -- even if they were fighting. And it sounds like you had a night to remember.

Thank you, Ada. I really liked your review. You write very well. Thank you again! You are awesome!

That is a fantastic review, Ada! You are a very insightful observer and eloquent reviewer. Keep it up and thanks!

You are very funny. And I agree.

I just bought tickets to Spiderman - Turn out the Dark last night and my friend sent me a link to read your re priew. Now I am even more excited to see it! It will be my first trip to NYC even though I am 51 (and that still makes me nervous) but I think seeing this Broadway play will keep me motivated. Thank you for sharing your experience with us!

ADA! You are amazing. Your reviews are better than the Tribune! You should be very thankful to your parents for letting you experience the incredible world of theatre. Keep doing what you're doing!