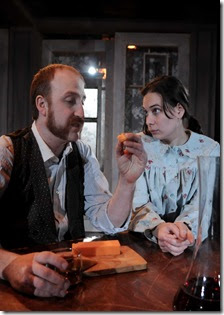 Hilarious, what a smart little woman!

Ada-As the guy who did the lights, I'm curious what you mean when you said that it was a "light and dark play"...Glad you liked our play.

Ada - I enjoyed your review very much. I am the mother of Yelena/Shannon and mother-in-law to Astrov/Kyle. I enjoyed Uncle Vanya so much, I just went to see it a second time and took two friends.

I was really surprised by the gunshot, too! But of course the second time, I was prepared.

I thought Astrov/Kyle was really good and very funny as a drunk. But it is good to know that he isn't a drunk in real life.

I always love costumes and I thought these were beautiful, too. Aly has a lot of sewing to do, didn't she? I did think Yelena's were the prettiest dresses.

I had read this play before I went, with a script that wasn't nearly as funny as this one. So I was really happy to see the humor brought out in this version.

I loved the set, too. It is amazing how different they can make the Strawdog stage look for each play they do. Such imagination!

You are a lucky girl to be in a theater family and get to go to plays and learn so much about this world at your age. I'm trying to remember the first play I took Shannon to. Her grandpa loved the theater and used to take her and her cousins to plays in the area when she was young. She enjoyed being in plays in high school and then college. By that time, we were going to a lot of plays and I used to try and keep a list of every play I'd taken her to see. It is a wonderful experience to see all these stories.

I hope you will keep on writing about the plays you see. When Shannon was young we didn't have these blogs where people can so easily express themselves. It is so great to have these now and so nice that you are participating this way. (Shannon created a little newspaper called Flagpole, but I don't think she ever wrote a play review for it).

I hope to see you at Strawdog some time.

Ada-Strawdog linked to your awesome blog and received so many cool comments. checkout Strawdog's facebook page and see.